There’s one word that perfectly describes successful DevOps: flow. As individuals, we experience a state of flow when everything in our work comes together naturally and at the right time. DevOps enables that kind of flow at the organizational level through a combination of tooling, culture, and process.

While DevOps is sometimes referred to as a methodology, it’s better understood as a set of practices, ideas, and methodologies that share a common philosophy: continuous value delivery. Put simply, there’s no one-size-fits-all approach to DevOps—and successful examples of DevOps can look very different from one organization to another.

At GitHub, we design tools for DevOps organizations and work with leading teams and companies. In doing so, we’ve identified a number of common pain points people experience when adopting DevOps.

In this guide, we’ll answer the following questions:

Is DevOps a methodology or a process?

If you ask 10 people to define DevOps, you’re likely to get at least five different answers. Some people might focus on the practical implementation of DevOps—CI/CD, test automation, and so on—and they’ll call it a process. Others might call DevOps a methodology with a set of processes that work together under a coherent philosophy.

Find out how we define DevOps at GitHub >

But both of these definition miss the larger point: DevOps consists of a set of practices that are adaptable to each business that adopts them.

At GitHub, we believe it’s better to understand DevOps as a framework for thinking about how to deliver value through software. It’s more than a single methodology or collection of processes. It’s fundamentally a set of practices—both cultural and technological. Let’s break that down.

Understanding DevOps as a framework

For decades, people have promoted neatly defined ideas of how each step of the software development lifecycle should work. But what seems like genius in a whitepaper often falls apart in practice because each organization is different.

DevOps acknowledges that. Rather than prescribe every detail, DevOps brings together a set of practices, cultural ideas, and tooling that work under a framework that's malleable for the needs of a given team and organization.

At its core, DevOps seeks to get higher-quality software into the hands of end users as fast as possible. This commitment to continuously delivering value is foundational to any successful DevOps organization—and it’s accomplish in three ways:

How DevOps differs from agile and friends

Agile, extreme programming, and other similar development methodologies were reactions to the conflict between traditional programming and software distribution through the web.

Before those ideas became popular, one of the most popular development methodologies was the highly sequential waterfall methodology. In that system, each step had to be complete before the next could start. That often meant lots of paperwork and planning needed to happen before a single line of code could be written.

In 16 months, we've gone from over 30 siloed software engineering groups to a largely cohesive team across McKesson.


The creators of agile software development principles recognized that over-planning stifled the creativity of software developers—and without working code no one could know if the plans even worked. The Agile Manifesto, for example, said that working software was more important than excessive documentation. Being responsive to change was more valuable than sticking to a plan.

In practice, the concepts behind the Agile Manifesto were revolutionary. It recognized that working code was the best way to understand and serve customer needs. But that focus on code also meant it had less to say about the rest of the SDLC.

If agile was a reaction against the old ways, DevOps builds upon agile’s core ideas and applies it to the entire software development life cycle. In fact, some people in the early 2010s called DevOps the second decade of agile.

To understand the difference between DevOps and Agile, it helps to compare their core tenets:

What is the goal of DevOps?

The goal of DevOps is to match how we make software with the way the cloud enables us to use it. The cloud took us from an era of barriers—individual servers, software release dates, role-based silos—to an open world where software is ubiquitous.

In the past, software development had distinct stages and a final product that might be compared to a production line. This was understandable—in the era of physical media, software development was a far more regimented and linear process. After all, a final release actually was final in a sense since distributing updates meant restarting the linear production process from scratch.

But the modern SDLC isn’t a production line. Software as a service and other innovations in cloud-based technologies and platforms have made distinct releases as relevant today as punch cards and room-sized calculators.

So, how does DevOps bring the SDLC closer to the always-on, always-up–to-date expectations of the cloud?

Why we needed DevOps

There was a time when publishing software meant distributing physical media. Whether it was in a shrink-wrapped box via stores or through a system administrator who’d update each workstation in an office, software releases required advanced planning.

In an era where software development was governed by manufacturing and distribution deadlines, sequential methods like waterfall were a natural fit. But that rigidity came at a cost. Release dates were fixed and missing a deadline could mean losing factory time, trucks sitting empty, and retailers giving shelf space to competitors. Software producers had a choice: they could ship high-quality software slowly at a higher cost or they could sacrifice quality to meet the deadline.

Since adopting GitHub, it's like night and day. It's the collaboration, it's the sharing, it's the community—it's all because of GitHub."

Senior Director of the Build Platform George Swan at Autodesk


The shift to web-based distribution should have freed teams of that dilemma. But many companies and technology teams were organized around fixed release dates with tooling, processes, and team structures to support that software development and delivery model. There was a missed opportunity to improve quality and get value to users faster.

But that wasn’t the only change the web brought. Suddenly, security mattered in a way it rarely had before. Quality was no longer just about catching bugs but also protecting data from any and every bad actor with an internet connection.

Software development had to change. The road that led to DevOps was a reaction to the friction between distributing software through the web and how that software was made.

DevOps provides a framework for software development that fits with the grain of modern cloud applications, meaning practitioners no longer need to sacrifice quality for speed or cost.

Organizations around the world are adopting DevOps because it helps them ship more reliable software faster. Much of its success is due to its flexibility. Rather than demand radical change, DevOps offers a number of cultural and technological practices that can and should be tailored to the individual circumstances of each organization.

Yet even if the individual implementation changes from one business to another, organizations that successfully adopt DevOps share a number of common benefits. These include: 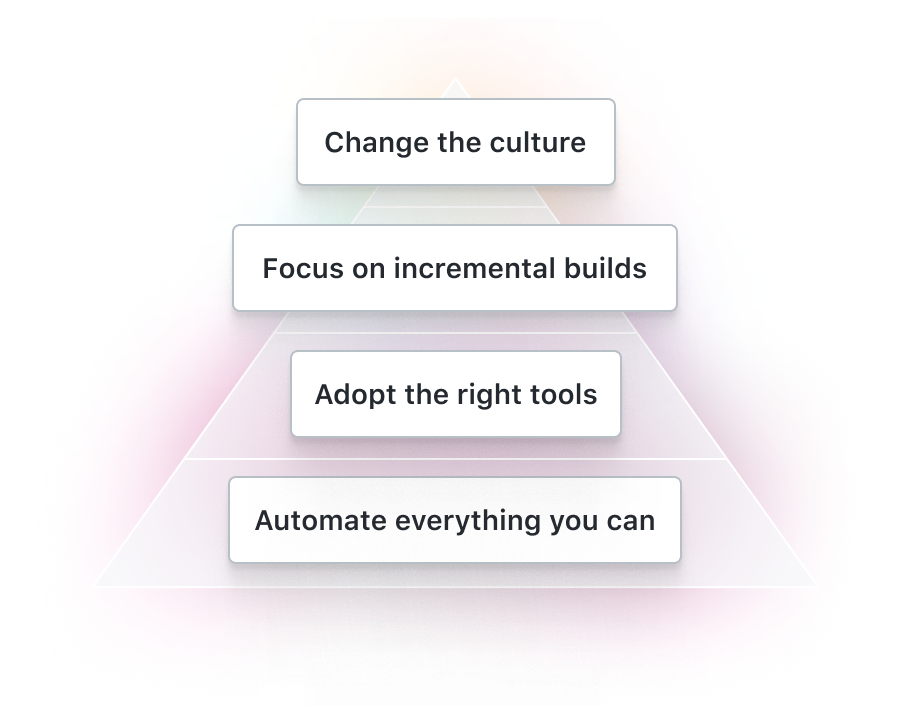 How your organization can adopt DevOps

Successfully adopting DevOps can require some big changes. But rather than reworking all of your processes and tooling overnight, you can take relatively small steps to get started. This might entail making cultural changes to how often your development team integrates their code or automating small pieces of the SDLC in your organization.

No matter where you are on your DevOps journey, there are six key steps you should take to successfully adopt DevOps:

We have a slogan on our team: don't let a human do a machine's job. GitHub helps us achieve that.

Before beginning your move to DevOps, you should take note of some of the common challenges that organizations face when making the change. These include:

Adopting DevOps begins with a few small changes, growing until each stage of your SDLC follows the DevOps framework. Even then, there are always opportunities to improve.

The move towards DevSecOps

As a set of practices, DevOps is always evolving—and one of the most apparent evolutions today is through the move to DevSecOps. While DevOps was originally about sharing accountability for how code performs in production, DevSecOps builds on that and seeks to make everyone responsible for that code’s security.

In our connected world, software security is fundamental—and DevSecOps establishes robust processes to build security into every step of the SDLC. Adapting the DevOps idea of continuous improvement, DevSecOps makes improving security an ongoing process and one that begins as early in the SDLC as possible. 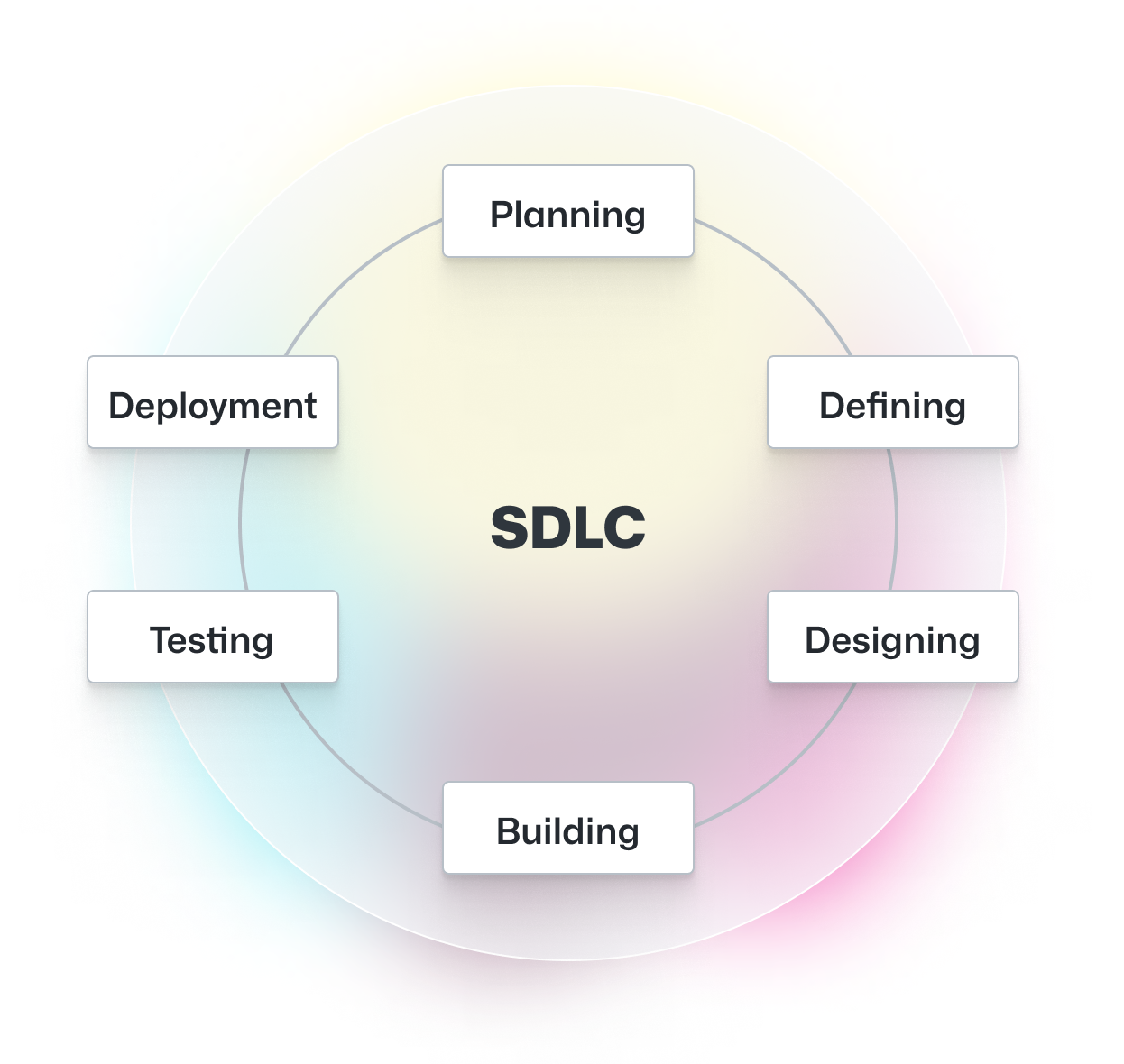 DevSecOps pushes security as far to the start of the SDLC––or as far left––as possible. Security begins at the design stage with tools such as static application security testing automatically checking for vulnerabilities before code ever gets to production. Often, that move to consider security early in the SDLC is called shifting left.

Learn more in our guide to DevSecOps, shifting left, and GitOps >

GitHub is an integrated platform that takes companies from idea to planning to building to production, combining a focused developer experience with powerful, fully managed development, automation, and test infrastructure.

The availability of out-of-the-box integrations with our existing tooling is a big part of GitHub's appeal. GitHub really helps bring DevOps to life