As a key part of Arm Total Solutions for IoT, Arm Virtual Hardware enables software development in advance of silicon, simplifying the development experience and accelerating Arm-based IoT product development. It delivers test platforms for developers to verify and validate embedded and IoT applications during the complete software design cycle. Arm Virtual Hardware runs as a simple cloud application for simulating memory and peripherals, removing the complexity of building and configuring board farms and removes any delays with hardware delivery. By combining it with modern software development technologies such as CI/CD (DevOps) and MLOps, you will feel the charm brought by cloud-native technology for embedded and IoT application development.

GitHub Actions is a continuous integration and continuous delivery (CI/CD) platform that allows you to automate your build, test, and deployment pipeline. In this step-by-step guide, we will show you how to use Arm Virtual Hardware with GitHub Actions for an efficient CI workflow.

From your GitHub repository, navigate to Settings>Actions>Runners>New self-hosted runner.

Currently, Arm Virtual Hardware hosted in AWS only supports 64-bit(x86) Amazon Machine Image (AMI), so select Linux as Runner Image and x64 as Architecture. In the subsequent contents on the same page, some command scripts are generated automatically to help you download the runner package, configure, and create a runner in your self-hosted runner (refers to Arm Virtual Hardware AMI in this use case). The scripts in your own page can be used directly in the next step. 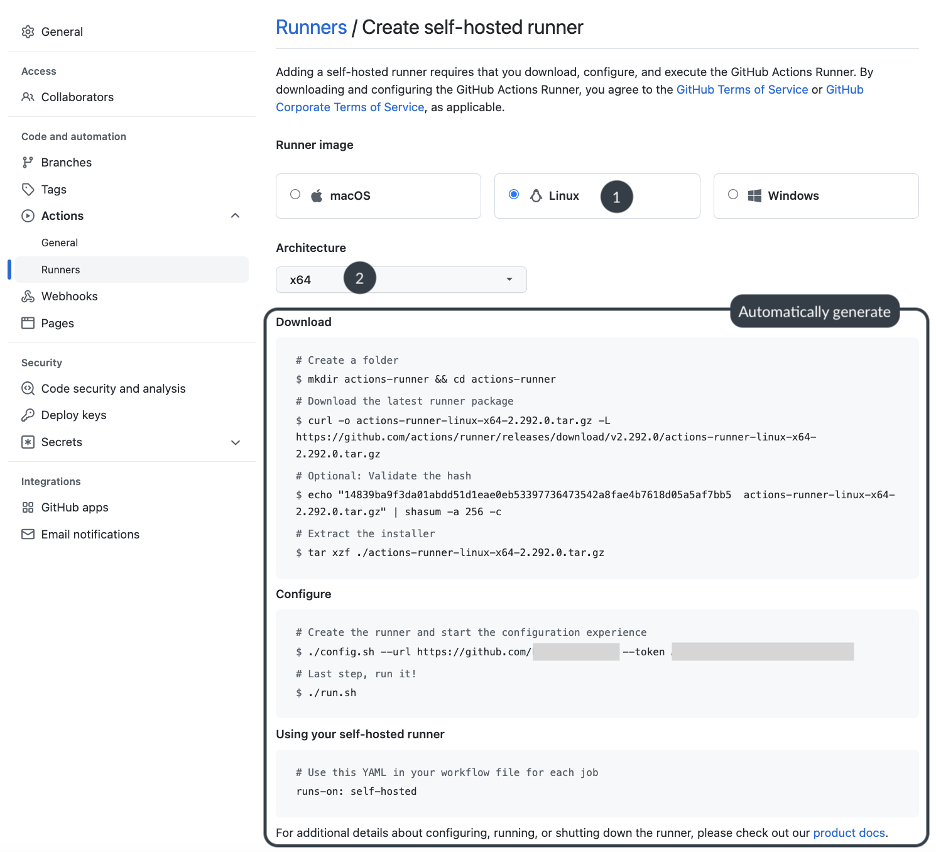 Create an Arm Virtual Hardware AMI instance on AWS EC2 and log into the instance using ssh connection command ssh -i <key.pem> ubuntu@<AMI_IP_addr> After connecting successfully, you can see the username change to ubuntu@<AMI_IP_addr>:~$ in the AMI terminal. For more verbose Arm Virtual Hardware AMI instance launch instructions, see this document. By default, when you log in, you are under the base directory /home/ubuntu. Copy scripts under the Download and Configure session directly from your own self-hosted Runner settings page to execute in instance. The token value (specified by --token) is dynamic and may be invalid if you don’t use it in time. Ensure to keep your webpage fresh when you try to configure this in your AMI terminal. 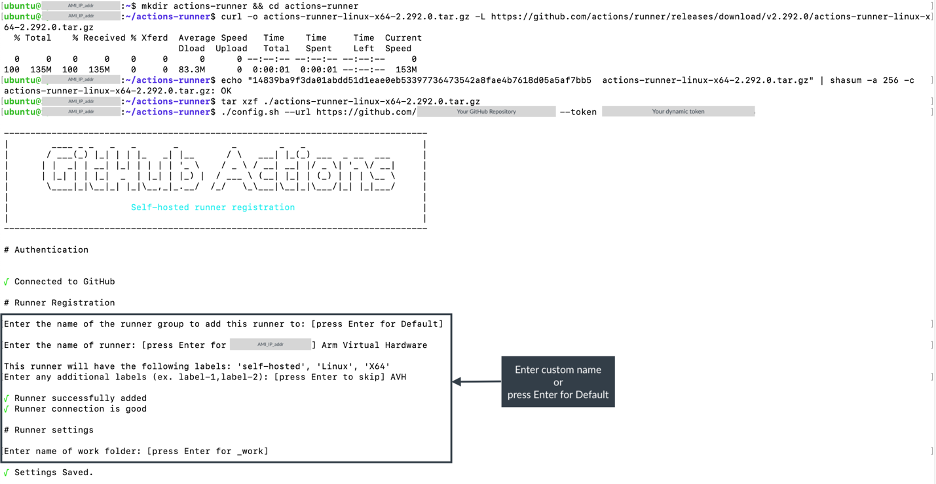 After using command: ./config.sh --url https://github.com/Your_github_account/Path_to_your_repository --token Your_dynamic_token You will see some prompt information as shown in Figure 3. Enter your custom name or press Enter to use Default name. In Figure3, I specify Arm Virtual Hardware as the name of the runner and add AVH as an additional label. Once the configuration step is finished, run it with command ./run.sh and you will see a prompt information to show the connection is successful.

GitHub Actions are event-driven, meaning that you can run a series of commands after a specified event has occurred. You can configure a GitHub Actions workflow to be triggered when an event occurs in your repository. A repository can have multiple workflows, each of which can perform a different set of tasks and they are defined in the YAML file under .github/workflows directory in a repository. If you are new to GitHub Actions, see Understanding GitHub Actions to learn some core concepts and essential terminology of GitHub Actions, or refer to GitHub Actions Guide for more verbose features.

We already defined a basic workflow in AVH-TFLmicrospeech repository to help you get started with Actions on CMSIS projects. For further details, see virtual_hardware_sh.yml, which enables GitHub Actions CI tests running on the Arm Virtual Hardware AMI instance as a self-hosted runner using the following steps:

on: # To allow you to run this workflow manually from the GitHub Actions tab add workflow_dispatch:

If you hope to trigger the workflow on every push or pull request events for the "main" branch, remove the comment symbol # before the command line as below:

c) Set jobs details for this workflow. Below is a part of the code, see full code scripts at virtual_hardware_sh.yml. This workflow has only one job named ci_demonstration. By using command runs-on:self-hosted, it will allow this ci_demonstration job to be executed in self-hosted runners which is the Arm Virtual Hardware AWS AMI instance in this use case.

It takes several steps to finish this job. In the provided example, the script finishes a process using the CMSIS-Build toolchain to build a simple CMSIS project and make it run on Corstone-300 FVP Platform. If you are not familiar with the YAML syntax, see Understanding the workflow file and Workflow syntax for GitHub Actions. Note, these steps depend on what you hope to do in your CI test.

The test results will be displayed in the visualizer dashboard in the Actions Page. You can click on each workflow to see more running details like jobs, steps, and time duration. The live log provided can conveniently help you figure out whether the test has failed or not and why.

When running GitHub Actions with the Arm Virtual Hardware AMI as your self-hosted runner, you need to manually launch, configure, and stop the AMI instance. Please remember to terminate the instance when you no longer need your CI test otherwise you will be charged. For detailed pricing information, see the Arm Virtual Hardware AMI product page in AWS Marketplace. You can also register to access 100 hours worth of free AWS EC2 CPU credits from Arm and AWS here.

As mentioned above, we use the avhclient to deploy projects on Arm Virtual Hardware from a command-line interface, so we need to setup the AWS infrastructure at first to ensure that all resources required for running avhclient are available.

The simplest way to do this is explained verbosely in Arm Virtual Hardware AWS-CloudFormation repository and it relies on AWS CloudFormation service with the template file to create necessary AWS resources and obtain the values required for AWS backend setup. Once you have finished, as shown in Figure 8 in the Ouput tab, you will obtain several items as below which you may need for using an Arm Virtual Hardware AMI. Remember the region where you have established the stack (Shown in the upper right corner of the page, on the same line as your AWS Account information) as this will be used too.

We have already defined a basic workflow in AVH-TFLmicrospeech repository to help you get started with Actions on CMSIS projects using the GitHub-hosted runner. See more details at virtual_hardware_gh.yml.

This workflow has only one job named arm_virtual_hardware. By using command runs-on:ubuntu-latest, the actions is to run in an ubuntu-based runner hosted by GitHub.

In the provided example, the scripts install python 3.10 and avhclient in the GitHub-hosted runner. Then, by using command avhclient -b aws execute --specfile ./avh.yml, it will specify aws as the avhclient backend by -b and specify avh.yml under current directory as YAML specfile by --specfile to run avhclient execute command. To check more verbose and the latest details about how the avhclient works, visit Arm-Software’s avhclient repository. For more details of what this CI test will do in the Arm Virtual Hardware instance, see avh.yml file.

As mentioned in step 2, we use GitHub Actions Secrets to configure running environment variables. Navigate to Settings>Secrets>Actions>New repository secret and add all the secrets you need in your own workflow YAML file. 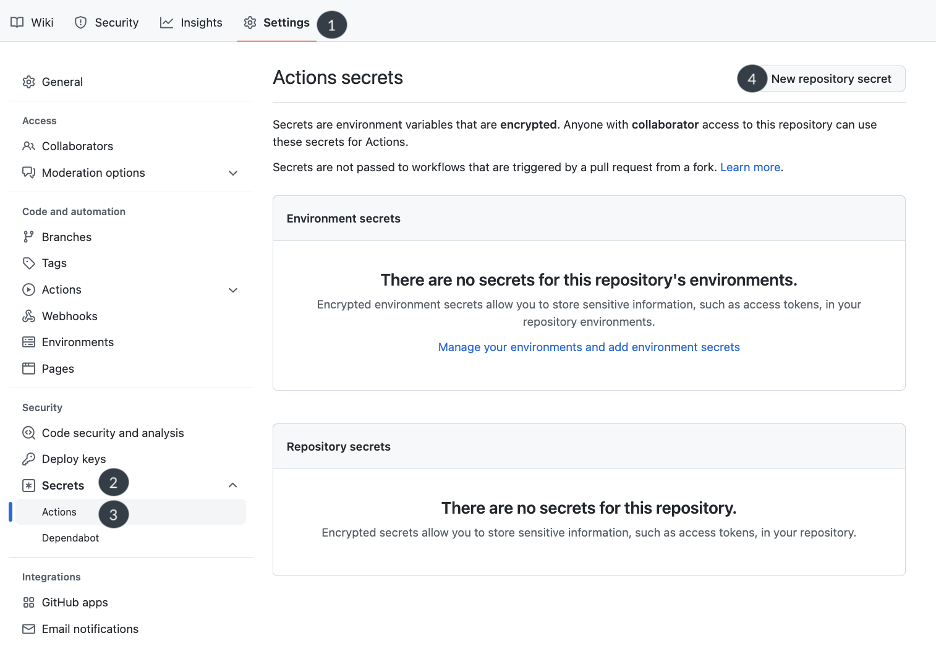 In provided example, add the following secret list to your repository’s Secrets. 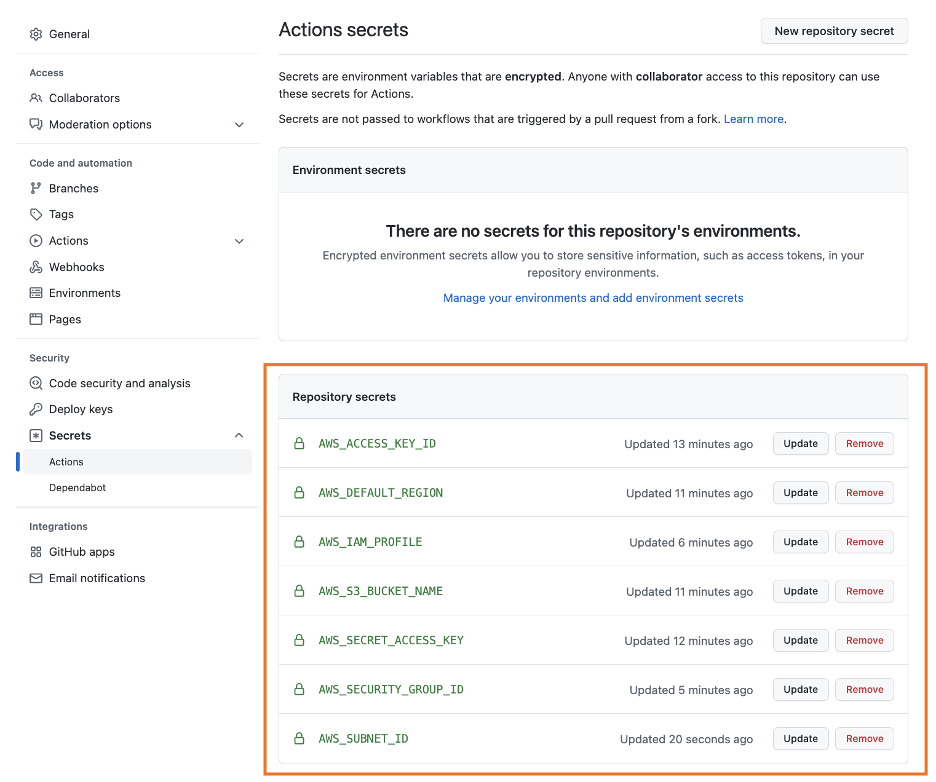 When running GitHub Actions with a GitHub-hosted runner, avhclient will help you launch, configure, and stop the AMI instance automatically and you don’t need to worry about forgetting to terminate your instance which may cause extra expense. Please note that since the GitHub Runner (Virtual Machine to run GitHub Actions workflow) is provided by GitHub, please learn more about potential billing expenses and the runner configuration details via Billing for GitHub Actions.

To briefly summarize, the major differences between a self-hosted runner and a GitHub-hosted runner can be found in the following table. You can use each way according to your demands.